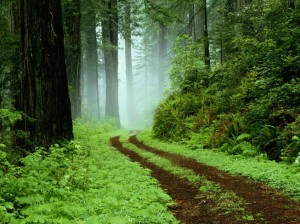 Assuming that form does in fact follow function, the expanding number of women engineers is nearly certain to change the way that engineering operates. Some engineering challenges actually employ the idea of letting what I’m calling the “feminine presence” emerge naturally. When the University of Oregon changed its main pedestrian walkways in the 1960s, the designers hit on a unique approach to measure human presence. Instead of laying the usual brick footpaths and expecting people to “stay on the trail,” they planted grass and watched, for a year, where people walked. Sure enough, and often in defiance of what the original designs organically suggested, people “designed” foot paths and trails though the grass. Then, the engineers laid brick footpaths over the then worn footpaths.

Take, as another example, the 1893 Chicago World’s Fair. In many ways, the event became a watershed for what would become the “American Century” of engineering. The chief board of engineers did not have a single person of color or any women on it. It would be easy to view this as a prime example of how women were left out of the American engineering revolution. However, when we examine the presence of the few women engineers and designers at the event (instead of focusing on the scarcity of women at the event), we are able to see their collective influence and abilities. Notably, as the epic Chicago World’s Fair inched closer to opening day, only the “Women’s Exhibit,” staffed and creatively designed largely by women, was completed on time. In this example, form (i.e., a team of women working together) achieved a successful function.

In an earlier post, I mentioned legislative tools aimed at forcing the employment of women in top management. Please, don’t misconstrue what I’m saying.  Laws can, and should, address the quantitative problem of discrimination, promotions based on the “good ole boys’ network” rather than merit, for example.  In the 1980s, the earliest part of my career, I was one of a very few women who worked in the engineering field. By 1998, the number of women in this field surged to over six percent of all Fortune 500 senior positions. Yet, between 2002 and 2012 – a full decade –  the rate of increase in women executives nearly flat-lined, growing from 14 percent to 18 percent, according to demographic data. This occurred even though the participation of women in the workforce approached full parity with the participation of men in the workforce.

We fix problems only when we can deeply understand them.  Women must search for the reasons why historic predictions of equality in engineering, science, and leadership haven’t worked out as predicted.  The underlying (and I think largely incorrect) assumptions about the “roles” of big data professionals – as defined by men – threaten to overshadow the organic development of the field. Unlike the University of Oregon’s footpaths, women are still typically required to conform to following the brick paths laid by men, cutting themselves off from their natural creative, collaborative and problem-solving abilities.  Big Data is fundamentally a creative, collaborative, problem-solving enterprise: asking questions, seeking answers, communicating results, looking at the bigger picture.   To fully tap into its potential, we need to let go of pre-conceived notions of what “should” be and explore what really works, for women and men alike.